India is a vast country and has more than 400 million students, the largest number in the world. To facilitate their studies, there are more than 15,00,000 Schools and 35,000 Colleges and Universities in India. The schools provide education till class 12 and then the students move to colleges and universities to pursue higher education in the subjects of their choice. The choice of colleges and universities to pursue the subjects of your choice is a difficult task. Students choose their colleges depending on many factors. A few of these factors include marks in 12th, merit, location and choice of subject. One is always scanning newspapers and the web to find out the best or top colleges in a subject stream.

There are lot of ranking systems existing, which rates the colleges and universities according to the facilities, citations and quality of education. The most popular of them were the surveys conducted by magazines and newspapers like India Today or Frontline. However, the best ranking available in our country are provided by NIRF, a Government of India undertaking. This is provided by National Institutional Ranking Framework managed by Ministry of Human Resource Development, New Delhi. In MyNextExam, we have taken these rankings as a standard to highlight the Top Colleges and Universities of India.

The Indian higher education system is very vast and is constituted by colleges and universities. It has expanded at a fast pace by adding more than 20,000 colleges and more than 8 million students in a decade and today India boasts of having more than 35,000 colleges and more than 800 universities. Thus NIRF has ranked all these colleges and universities clubbed together to give an overall ranking of these institutions. Parameters such as faculty, industry interaction and infrastructure have been used to for the ranking system. The impact of these rankings is immense. Colleges get to know where they stand in comparison and also gives them the impetus to match the competitors and in the process the standard of the colleges improve considerably. Thus they get to know which things need to be improved and areas to be focused for reviews. These rankings, without a doubt have a huge impact on brand name and marketability.

For the students, they help them choose their institutions for studies. However, the merit list also plays a role as students with good marks can only get admission in the top ranking colleges.

While these rankings are important, sometimes these rankings should not be the only criterion to judge a college. There might be factors that are not considered for rankings, and then there might be instances where a less prominent college might suit ones needs more than a well reputed college, in terms of fees, course structure or even distance. At time certain colleges do not apply for these rankings and thus do not figure in the lists. As it is not compulsory to submit data, that remains a fallacy in the ranking system.

The lists provided below thus rank these colleges based on NIRF rankings. The lists are for areas like management, medical, engineering and so on. Top colleges and universities in each area are listed. These are ready reckoners for Indian students of all courses to know about the status of a college and thus helps them in admission processes.

The colleges and universities on our website are organized according to 26 Streams and more than 450 Sub Streams providing information of more than 24,000 courses and related exams and admission processes. 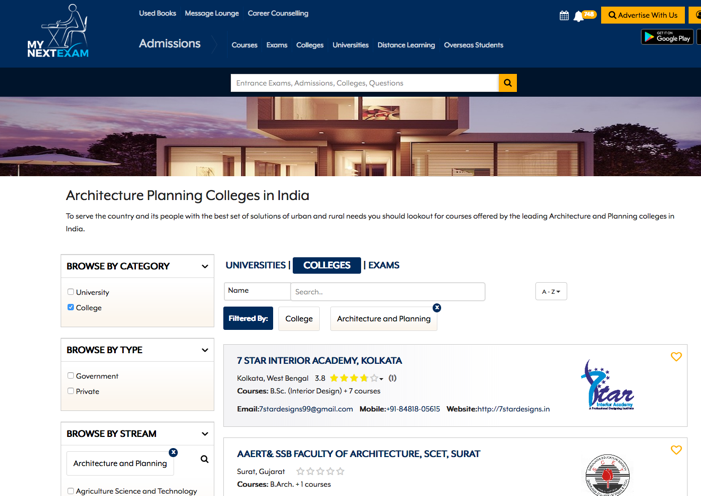 Find you Dream College from a huge list of Colleges!

All information about the college including courses taught, number of seats and qualifying exams available in a concise and precise way.

Accurate and updated information including ranking of the colleges is available.

All about Entrance Exams to gain entry into you dream College.

Accurate, updated and most current information about the qualifying exams available at the click of the button. Eligibility, applications forms, important details, admit cards, getting ready for the day of the exam and the details of counselling are all available at one go!

Download the details of the exams and it is delivered in a booklet form right to your email box! 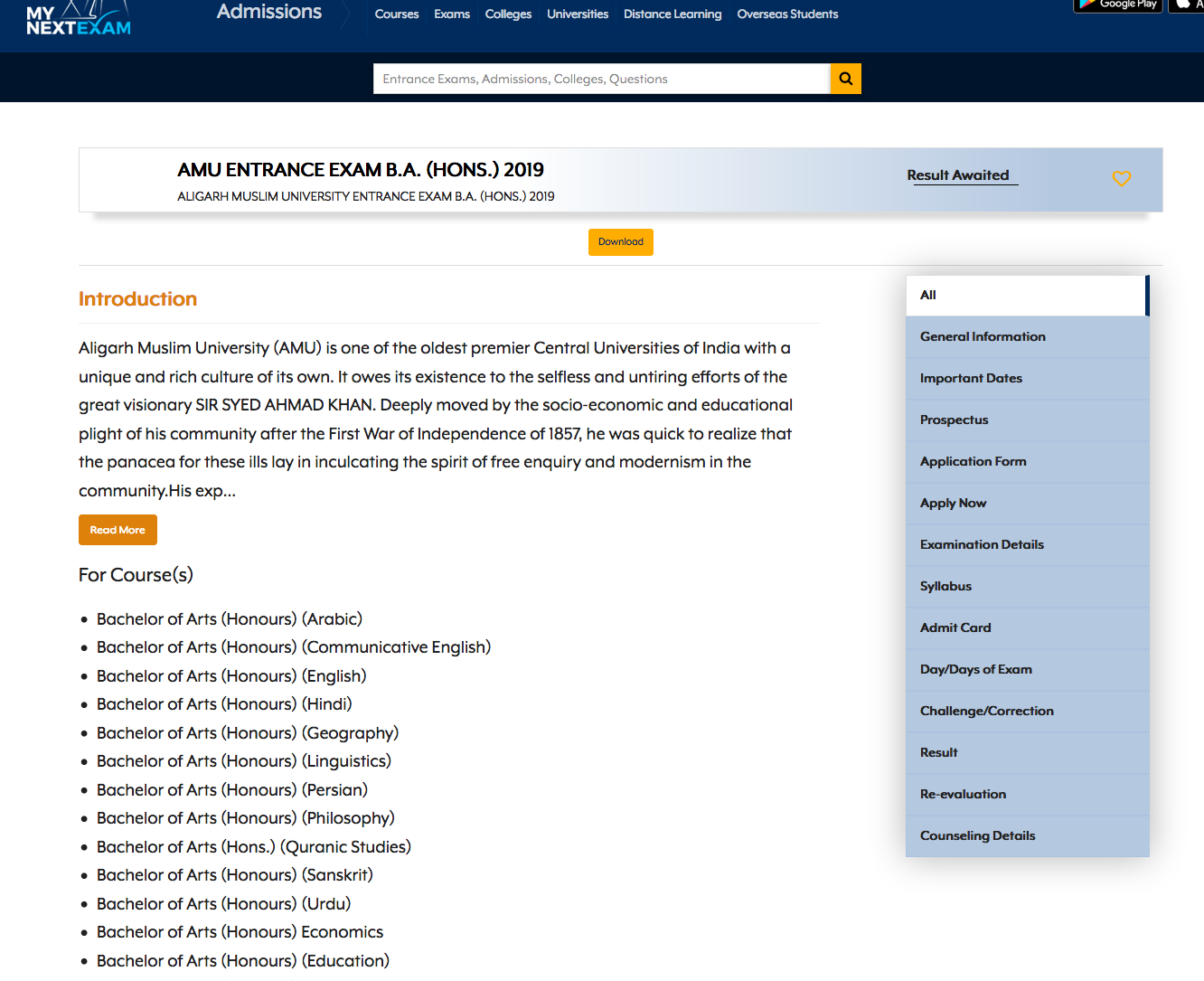 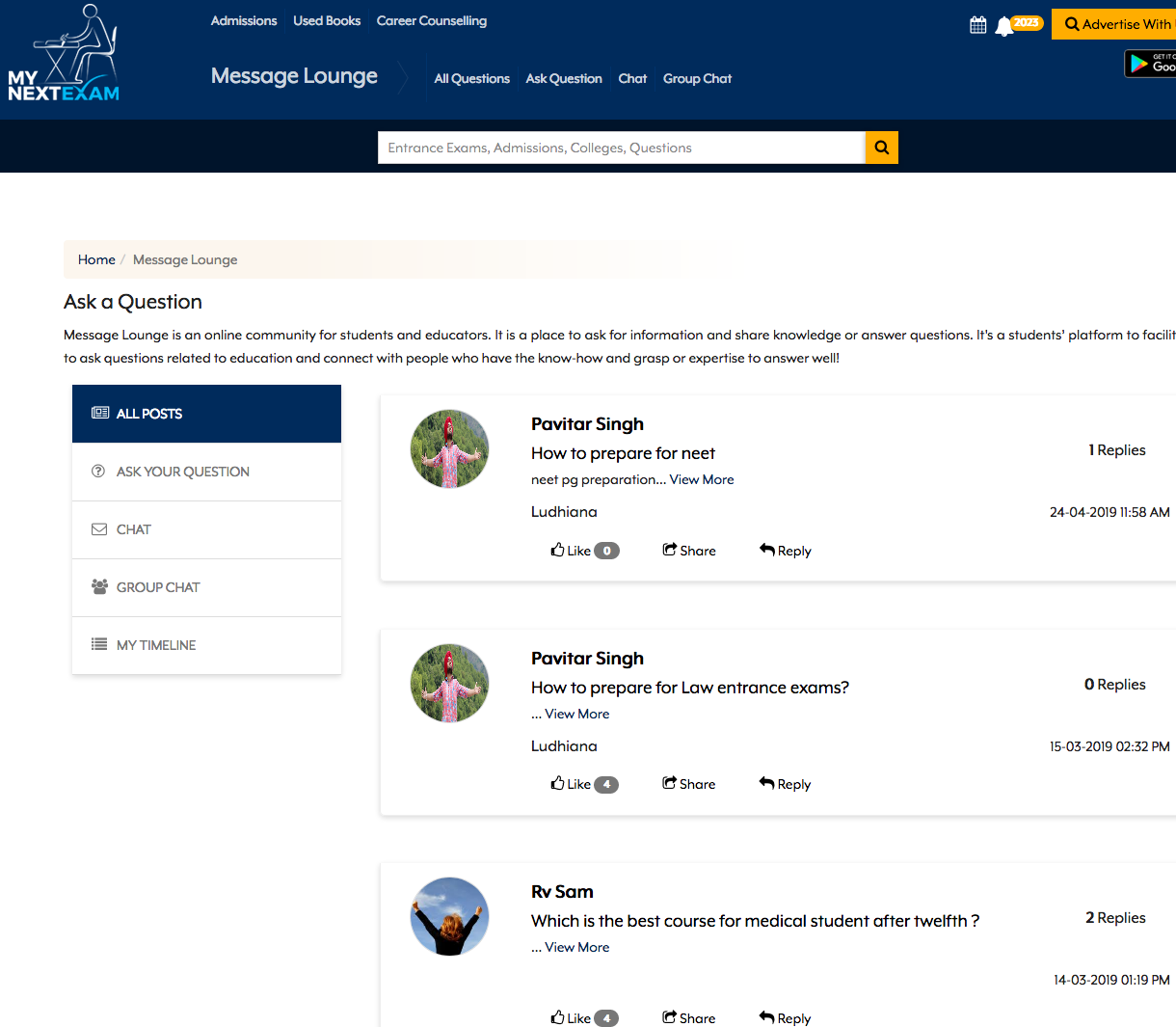 To Apply to Top colleges and interact with alumni or other aspirants, the Discussion Forum can be utilized.

Ask any question about your dream college and the alumni and students community will answer. Related articles are also available to help you get more insight into the admission process for the college of your Dream.

Just choose your college or a related course or entrance exam as your favourite on MyNextExam and stay updated about the important announcements, news, happenings and other related activities. 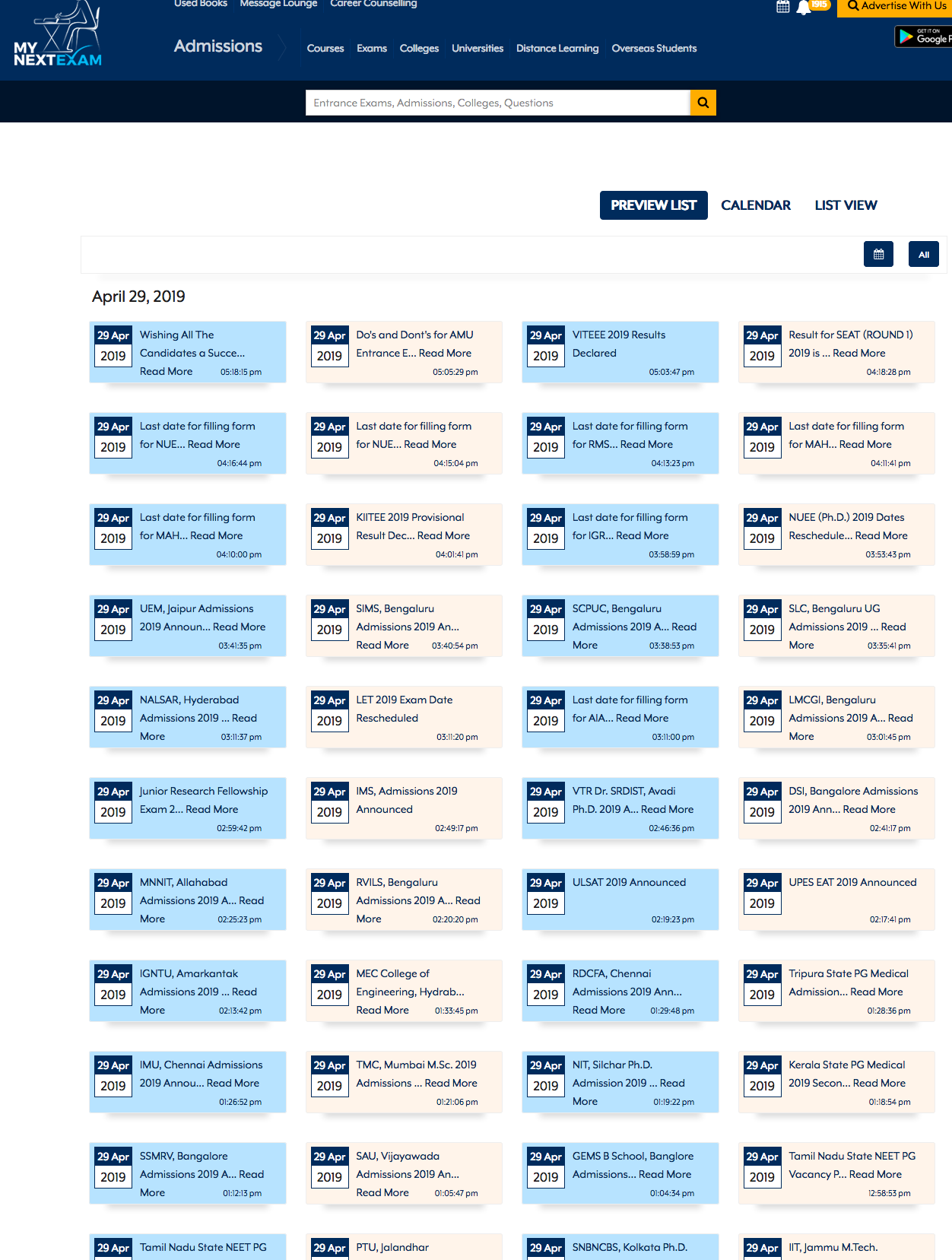 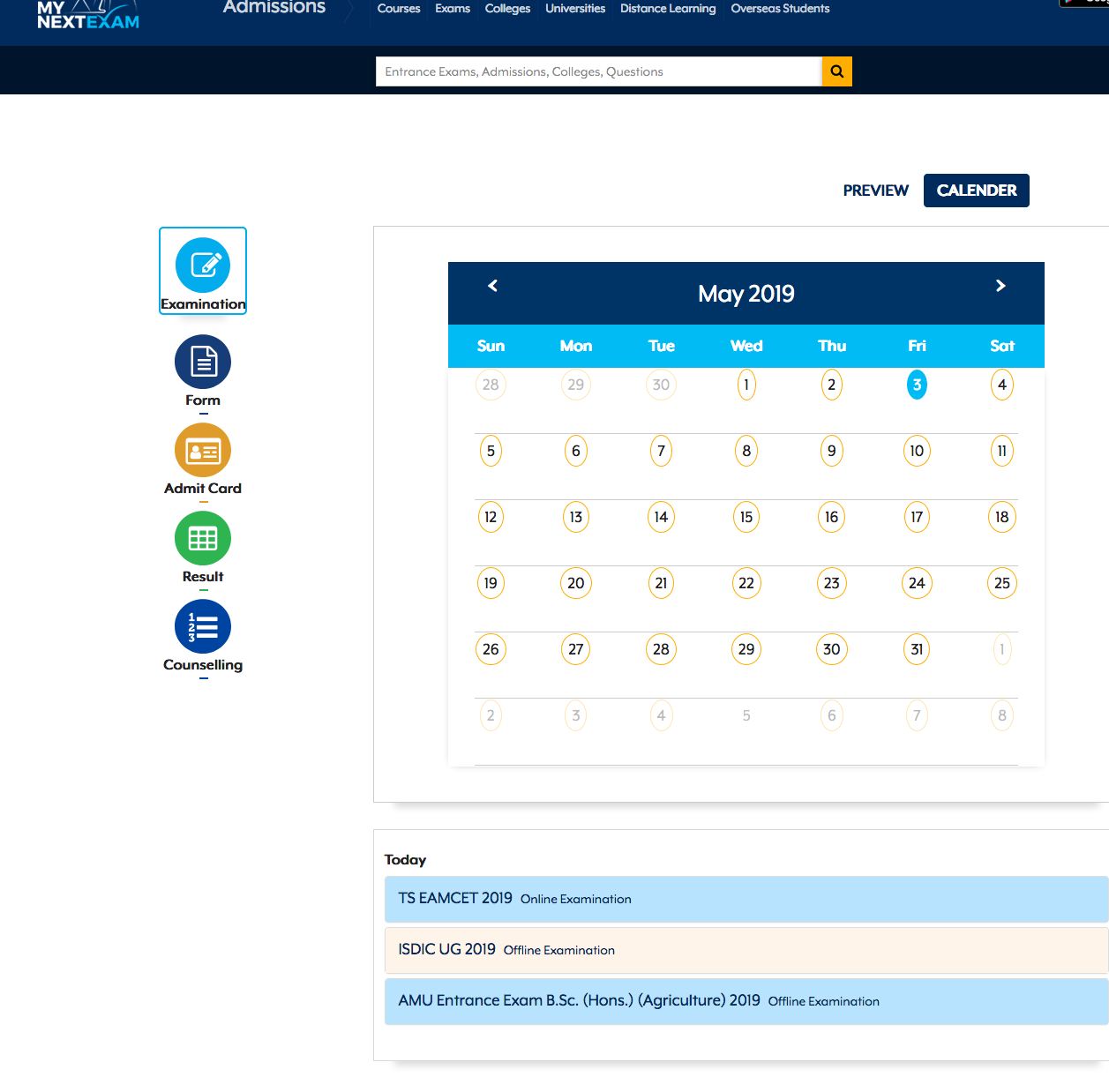 A ready Reckoner Calendar available to help you know about the Exam Schedules for your Admission to your Dream College!

Career Counselling plans are available both for school and college students; these are taken online and then a trained and experienced counsellor assess the results to generate a career profile report for you! You can choose to talk to the counsellor on phone or use email for any queries. 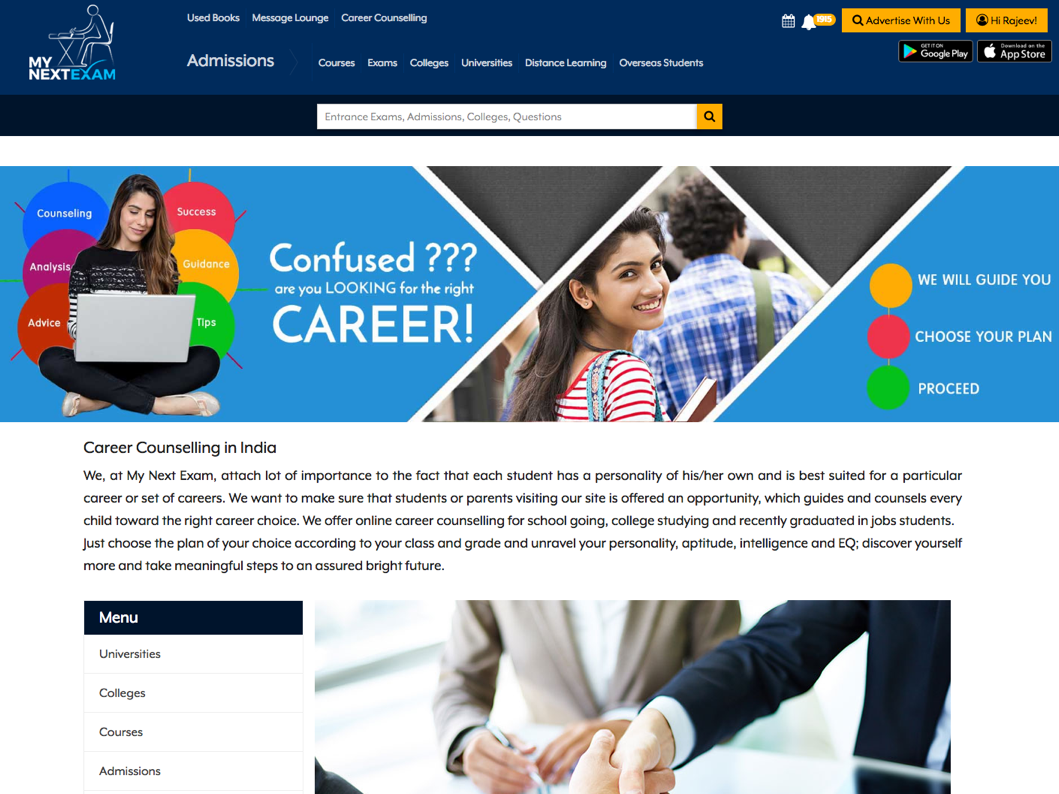 We hope that you find these lists useful!

Are you interested in Master's & Bachelor's programs through Online/Distance
Mode from India's top most universities. APPLY HERE